This is one of the Association’s concerns that properties of the same site valuation are not being rated the same. This does not demonstrate Equity and Fairness.

We have submitted to Council a suggestion that they establish Principles and Rules for General Rates as genuine rate reform.  Currently, the City has 45 different rating categories which are generating a real mess that has no apparent reasoning.  The following is our suggestions to consider in rate reform:

Support your Raby Bay Ratepayers Association to show our strength and come to the meetings.

Tenacity pays off – Action on the Park 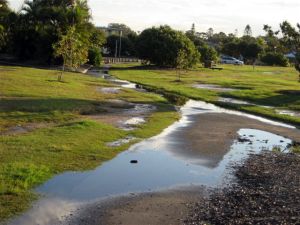 After several years of persistently raising issues and concerns with Council about the state of our foreshore park, our Parks and Gardens Subcommittee convenor Denise Foote has received an indication that Council is moving towards upgrading this popular community space.

Nearby residents have been consistently disappointed with the apparent lack of care and concern for their local park – hardly a good advertisement for Raby Bay, Cleveland, or the Redlands.

The good news is that Council have applied for federal funding to carry out the badly-needed work.  We wish them success with their bid.  Thanks Denise for your constant attention to this lifestyle facility.

See a copy of the letter here.

Welcome to new committee members at the AGM

Welcome to the New Year 2010 for Raby Bay Ratepayers Association specially the new members.   Applications are still coming in but we have passed the 200 mark which is great news.

On Monday 8thFebruary, the Association held its Annual General Meeting for 2009.  The Committee Executive were elected for 2010  Returning to the committee are:-

The Committee would like to echo the resolution of the meeting in thanking departing Treasurer Jan Proctor for her tireless and effective role as Treasurer to the Association over many years.

The next big event will be the Rates Rally at the Concert Hall on 29th March – see you there.

The Annual General Meeting of the Association will be held in the Volunteer Marine Rescue Raby Bay premises, William St. Cleveland at 7.30 pm on Monday 4 February 2013.

Nomination forms for Committee will be available on the night.

A General Meeting will precede the AGM with current issues being addressed.

Your General Rates and Canal Levies are out of control as well as indiscriminate spending by the Redland City Council.

WE NEED YOUR SUPPORT – JOIN NOW

The Redlands City Council have begun a process of reviewing the manner in which our municipal rates are calculated and apportioned.  The first step was a public information session held on Friday December 4, 2009 to provide education on the current process. Here is a copy of the Council’s press release:  InfoSessionOnRating

Thanks to all those members who attended and registered their interest in participating in the follow-on activities early in the NewYear.

Thanks also to committee member George Harris whose determined activity under the banner of Redland Rate Reform Group has in large measure brought about the review.

We now need all high-value propery-owners across the city to give support to George in his quest to have a fairere rating system in the Redlands.